California firefighters are battling over a dozen wildfires across the state, one being LNU Lightning Complex Fire in Northern California.

The LNU Lightning Complex Fire started on August 17 and has burned 375,209 acres, destroying countless homes and harming hundreds of animals. 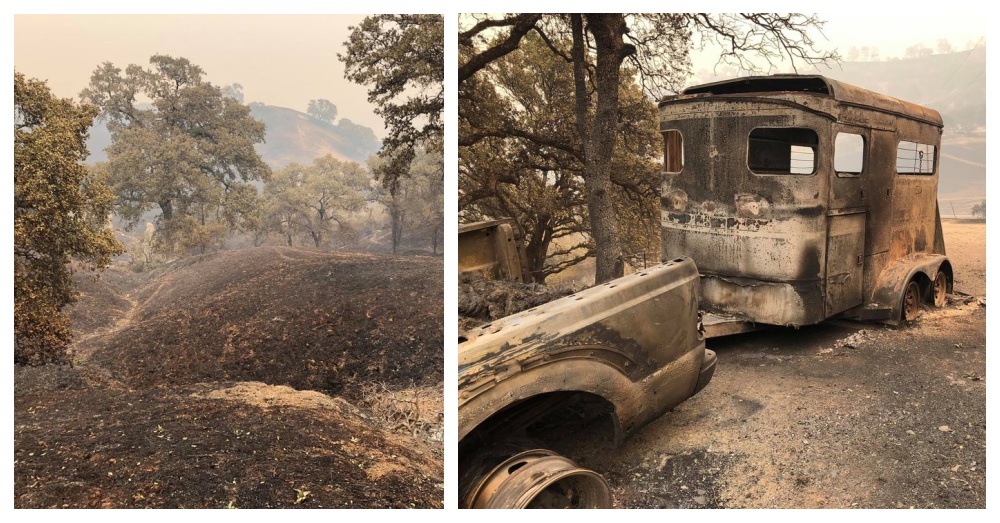 Marrissa Dorough, 28-year-old nurse, posted her devastating story on Facebook as a way to heal from the tremendous loss of her beloved horses. Five of her six horses were killed in the fire even though she did everything in her power to save them. “There was never even time for an evacuation warning,” she wrote.

As soon as she heard the fire changed direction and was headed toward the farm where she boarded her horses, she rushed to rescue them. She attempted to halter and lead them out of harm’s way but the fire quickly spread over the hill. The only option was to run and that is what Dorough did with her horses.

This is video from the #LNULightningComplex #HennesseyFire as it spread rapidly through the outskirts of #Vacaville on Tuesday night/Wednesday morning.

Rob Ludden recorded what appears to be a fire tornado as he tried to save his property. pic.twitter.com/46WCEQD3ZA

Rob Ludden who owns the property where Dorough’s horses were stabled recorded terrifying footage of the rapid moving fire. 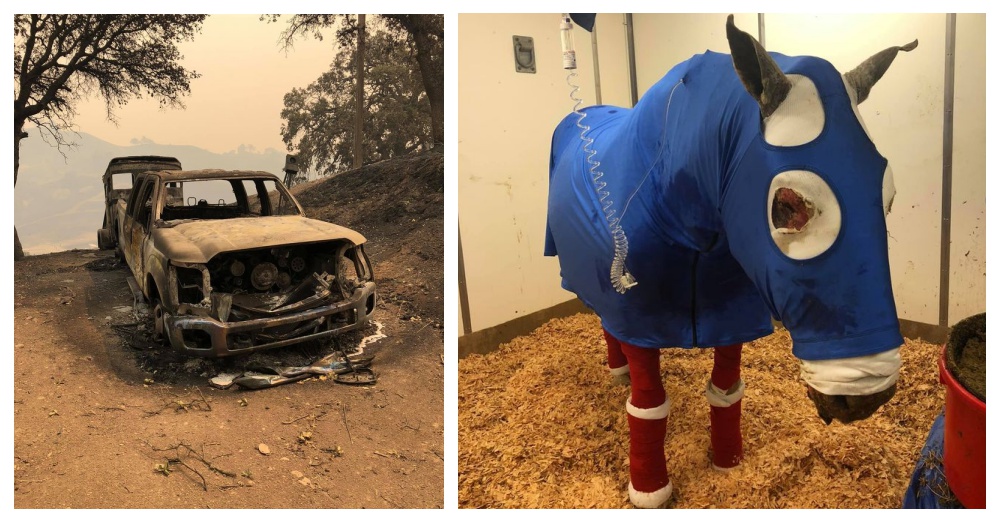 “All around us fire was seemingly falling from the sky and the hills surrounding, not just from the fire tornado, were catching fire and fanning out fast. It was circled all around. At the moment that it met up to throw flames over the road ahead of us the horses turned and ran up the hill to the second house on the property. I was screaming and losing it. I knew it was over when they turned up to the house,” she said.

Distraught Dorough said, “Every person that I have talked to has said this is something entirely different than what they’ve seen. It shouldn’t of happened this way.” 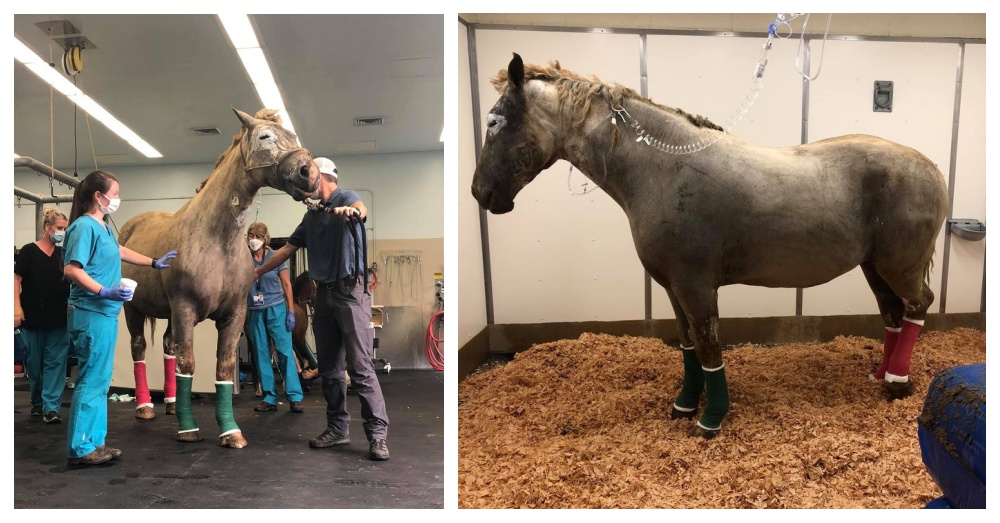 By some miracle Ava survived, but was badly burned.

On August 19, Ava was rescued and rushed to UC Davis veterinary hospital in critical condition.

“We have our first patients at the UC Davis veterinary hospital from the LNU Lightning complex fires. Ava, an 11-year-old draft horse was brought in from the Quail Canyon area. She was the sole survivor of six horses owned by a young woman who is also an RN who lost her home, truck, trailer, everything,” posted the hospital. 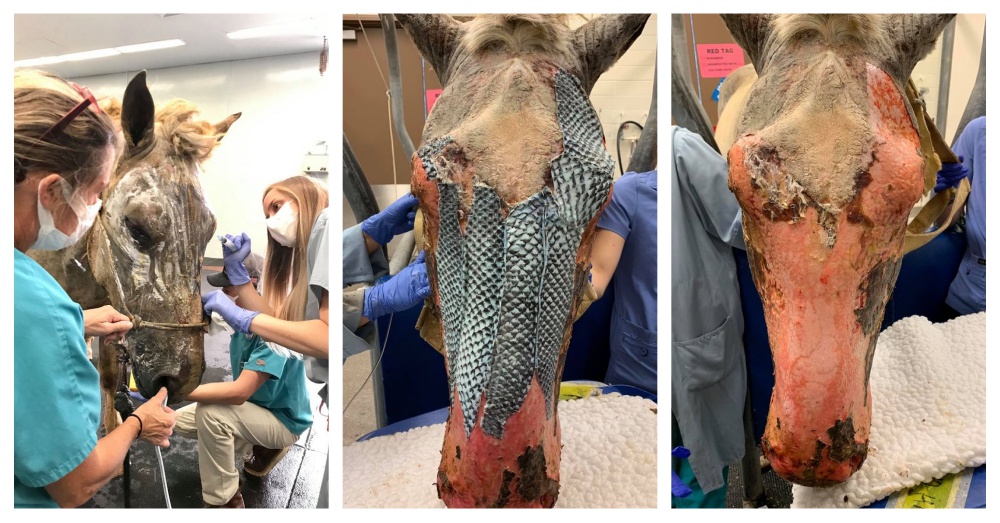 Ava has first-degree and second-degree burns all over her body and third-degree burns on her face. The staff immediately administered pain meds and started to treat her burns. She is receiving the best care and is eating with gusto, which is a good sign. She even nickers every time she sees her mom.

Although the road to recovery will be long, Ava is expected to survive.

Dorough updated people on Ava’s progress by saying, “she’s getting soaked grain every four hours. We are concerned about choke risk with how swollen she is. And man is she becoming hangry and throwing her food bowl around for more. It’s amazing she’s kept her sassy in your pocket spirit up this whole time. She’s got every reason to want to close off from the world after what she endured but she in her normal spirits. She’s so amazing.”

Ava is a fighter and her heartbreaking story has touched the hearts of many who have donated to her care. “This has been the worst time of my life by far but the community has been amazing. Your support and Ava is what is getting me through this. Thank you all from the bottom of my heart,” posted Dorough. 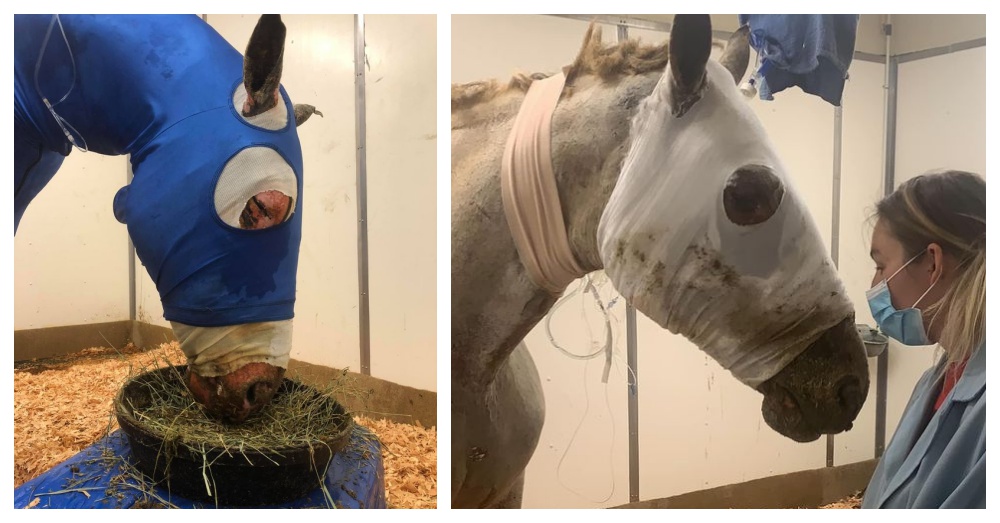 You can keep up to date on Ava’s recovery by following her on Facebook.

Rescue Volunteers Reunite Wild Foal With Her Mother After Tracking Down Band Of Mustangs: Click “Next Page” below!