Horses are majestic animals. Their beauty and fluid movements are something to behold. However, some horse trainers feel it is necessary to burn, chain, and inflict pain on certain breeds to exaggerate their natural gaits. Horses endure endless pain and suffering to their legs and hooves – just to win a blue ribbon.

Tennessee Walking horses are a gaited horse breed, that are known for their three distinct gaits. The flat foot walk, running walk, and the canter. The running gait is an inherited and natural gait, which the breed is known for. These beautiful horses move effortlessly and with grace, but some feel the need to ‘enhance’ the gait. 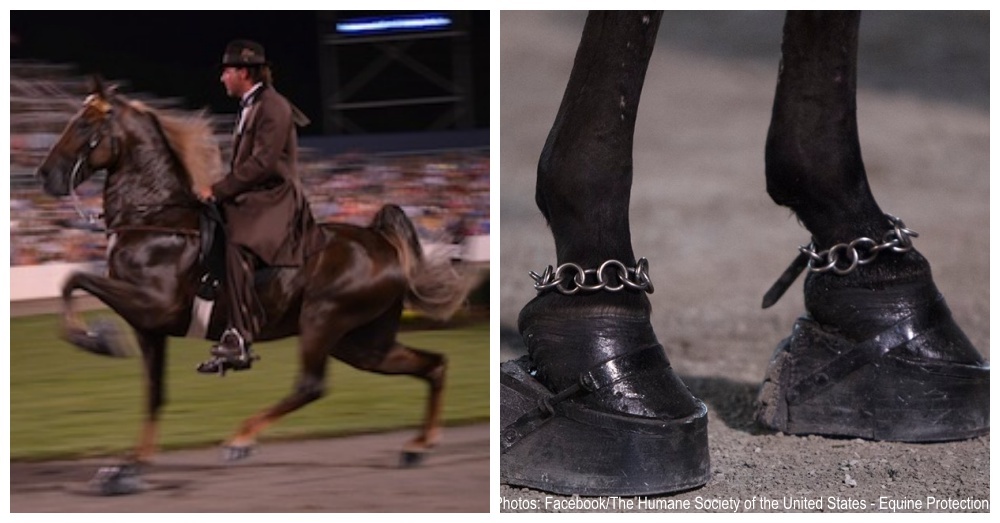 For decades, Tennessee Walking horses have endured abuse and cruel methods performed by trainers in an effort to make the horse pick their feet up higher and create a more dramatic show gait, called the “big lick.” The audience cheers for the dramatic performance, but there is nothing to celebrate. Horses are in pain and suffering. It is not a natural gait and can only be performed through painful and cruel methods. The methods are referred to as horse soring.

Horse soring involves Tennessee Walking horses and other gaited breeds that have pain inflicted on their legs and hooves to make them lift their legs higher in a gait. To obtain these exaggerated movements, trainers and people use “caustic chemicals—blistering agents like mustard oil, diesel fuel and kerosene—are applied to the horse’s limbs, causing extreme pain and suffering,” states The Humane Society of the United States (HSUS). The chemicals are placed on their legs and then wrapped in plastic to drive the chemicals into the legs. 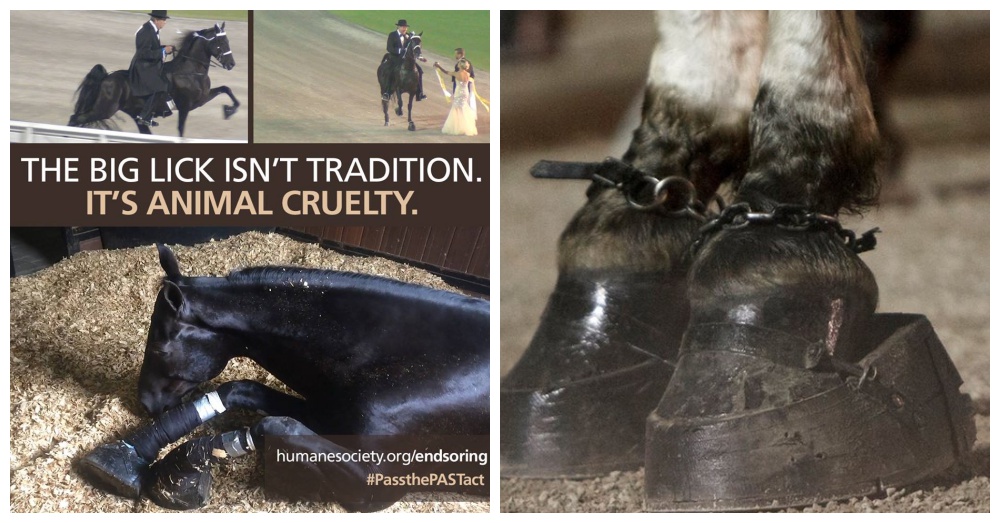 “A particularly egregious form of soring, known as pressure shoeing, involves cutting a horse’s hoof almost to the quick and tightly nailing on a shoe, or standing a horse for hours with the sensitive part of his soles on a block or other raised object. This causes excruciating pressure and pain whenever the horse puts weight on the hoof.”

There are many inhumane methods that are used. Heavy chains will be placed on top of the chemically coated legs, causing more pain and suffering, when riding in a show. Stacked and weighted shoes will be put on the horse with an unnatural angle. These show horses are confined to stalls, where many will lay down from the pain and moan. Their legs are left with open wounds and sores. 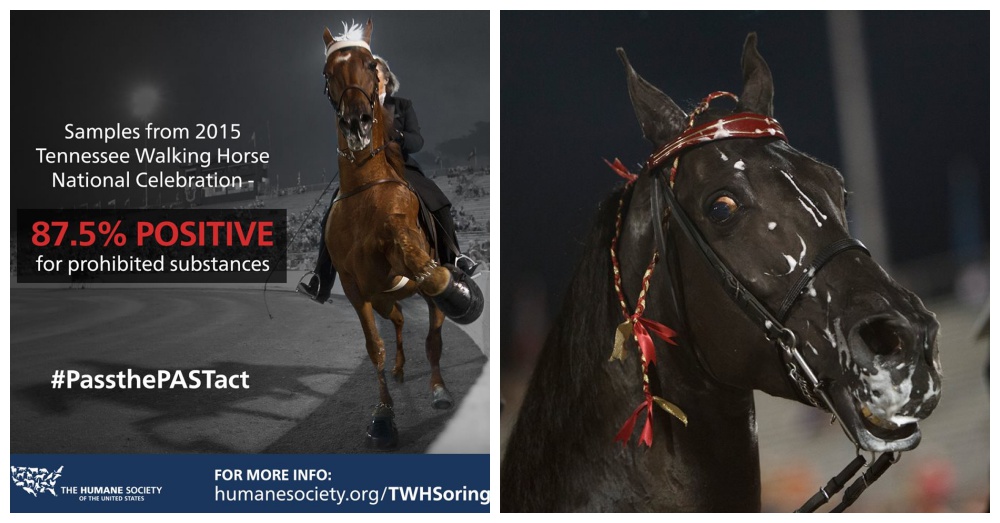 Sadly, horse soring has been occurring for decades. Congress tried to end the barbaric practice with the passing of Horse Protection Act of 1970. However, unethical trainers and people have found loopholes that allow them to continue the cruelty. The HSUS has been campaigning for horse soring to end, and the law to be reformed with penalties increased for people who mistreat horses this way.

Inspectors are at the shows looking for signs of soring, but trainers have become experts at covering up the signs. They will spray paint the leg to cover missing hair or wounds. To make sure the horse does not show pain in their front legs, they will apply a topical numbing agent. Soring is banned by the USDA and if a horse shows signs, they will be supposedly dismissed from the competition.

“Soring is so prevalent that at the Tennessee Walking Horse National Celebration, the industry’s biggest event, the USDA found, in 2016, that nearly 90 percent of horses tested positive for prohibited substances that cause pain or camouflage evidence of soring. In 2017, nearly 62 percent of horses tested positive (even under a new administration committed to working closely with the regulated industry),” states HSUS. 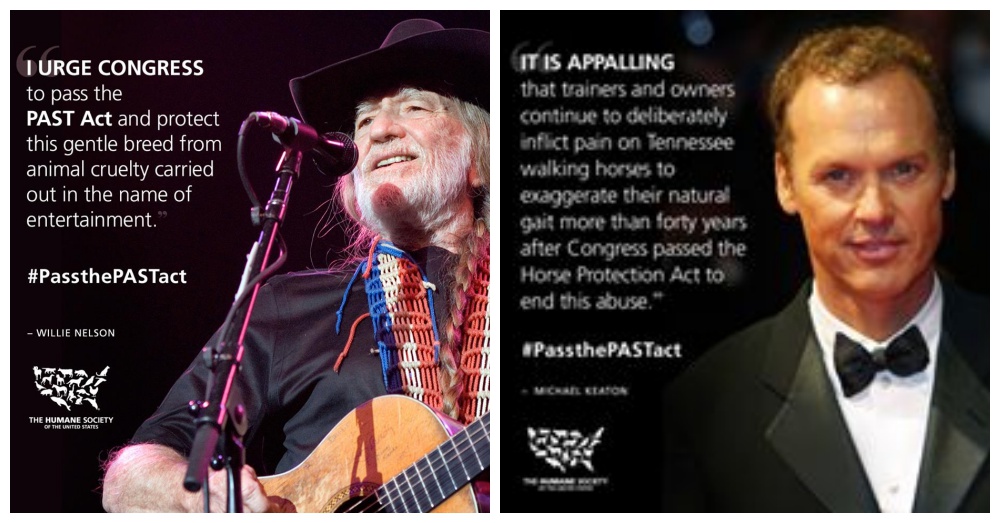 The USDA has taken steps to eliminate loopholes and reform the act to protect horses. “The Prevent All Soring Tactics (PAST) Act would amend the Horse Protection Act to end the failed system of industry self-policing, ban the use of devices associated with the soring of horses in the Tennessee walking, Racking and Spotted Saddle Horses breeds, strengthen penalties and make other reforms necessary to finally end this torture,” said HSUS. The PAST Act was backed by numerous equine industry groups, veterinary organizations, celebrities and 224 representatives and senators. Unfortunately, the rule wasn’t published in a timely manner, allowing it to be swept up in a “broader Trump administration policy to freeze rule-making actions still in progress.”

HSUS and many other animal welfare organizations are not backing down. They are asking everyone to speak out against horse soring and to contact your U.S. senators and your U.S. representative to urge them to cosponsor the PAST Act. Horse judges are also said to be looking the other way and placing tortured horses as winners, that only guarantees the pain to continue. Nothing justifies animal abuse, including blue ribbons!

Watch the video to see the difference between a natural gait and a horse that suffered horse soring.